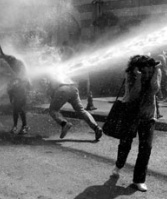 follow the Online-Petition against violence at the turkish protests

With great concern we take notice of the developments in Turkey. The violent clashes between police and opponents of the Islamic-conservative government of Prime Minister Recep Tayyip Erdogan reach new heights every day. Water cannons, tear gas, batons and bulldozers are the policy instruments now. Such strategies generate nothing but cemetery silence. Criticism of this approach is also expressed by the U.S. – usually not squeamish when it comes to their interests – and the United Nations, an organisation characterized as being reluctant in addressing quickly and competently human rights violations.

Writers from all over the world witnessed the tough battle to enforce freedom of speech in Turkey for decades. There is hardly any country, that is not considered to be governed “authoritarian”, where so many of our colleagues are intimidated and detained and subjected to lengthy processes, heavy prison sentences and other harassment. Regrettably we also had to take notice of assassinations. Far too often both perpetrators and their backers remained untraceable.

On this occasion, when the use of extreme police violence is enforced on protestants and Prime Minister Erdogan throws severe threats at them, we do not only protest against the (systemic?) violence, but also demand urgently a different approach to political dissent.

We ask all colleagues for a protest note, due on July 15, 2013. You choose the way you want express your protest. Send us a letter, a poem or a short prose, or even a cartoon. Email us: info@penclub.at

The book will be completed by the end of July 2013, and handed over to the Turkish ambassador in Vienna. A violent crackdown on protesters is not tolerated in the 21st century anymore. Once again the time has come to say: NO!

signed by the PEN Austria Board

The Dissident Blog of Swedish PEN on Turkey from January this year.

More reports:
– What is happening in Istanbul
– Today´s Zaman