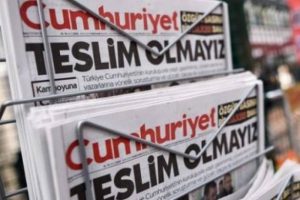 Following Turkey’s presidential and parliamentary elections on 24 June 2018, the Turkish authorities should end their continuing onslaught on freedom of expression and lift the state of emergency, PEN International said today.

President Erdoğan has won a new five-year term after securing nearly 53% in the first round of the presidential poll. He will now assume greatly enhanced powers under a new constitution approved by referendum on 16 April 2017. The constitutional changes grant wide-reaching centralised new powers to the president, including the right to rule by decree, to solely appoint or dismiss ministers, to abolish parliament and to call elections at any time. The new constitution also removes the authority of parliament to monitor the executive branch and debate budget bills, while also making it harder to impeach the president for criminal behaviour.

‘We remain deeply concerned by what the future holds for the separation of powers in Turkey’ said Jennifer Clement, President of PEN International. ‘With the independence of the judiciary already under immense threat, granting sweeping powers to the executive risks further eroding the necessary check and balances that are required to prevent abuse of power’.

The presidential and parliamentary elections took place in a repressive climate. The state of emergency, which imposes heavy restrictions on freedom of expression, has been in place for almost two years. Media and political pluralism, essential for free and fair elections, have been gravely undermined. Over 170 journalists and writers continue to languish behind bars. Opposition leaders have been jailed and elected officials forcibly removed. Party leader and writer Selahattin Demirtaş of the parliamentary opposition Peoples’ Democratic Party (HDP) even ran for president from his prison cell.

‘It is time for the Turkish authorities to set out the measures they intend to take to fully restore fundamental freedoms in Turkey. They must start by releasing all those held in prison solely for exercising their rights to freedom of opinion and expression, ending arbitrary arrests and prosecutions, guaranteeing media freedom, upholding the independence of the judiciary and lifting the state of emergency’, said Jennifer Clement.