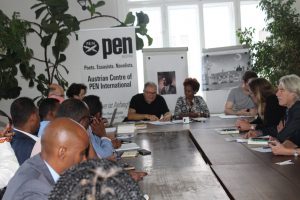 PEN Austria convened the third Vienna International Strategic Conference on Human Rights in Eritrea on the 7th of November. More than 25 activists and rights defenders from seven countries took part at the event.

On the occasion of Dawit Isaak’s new German translation of his book Hope and other texts (Hoffnung: und andere Texte), the conference highlighted his case. Eritrean-Swedish journalist Dawit Isaak, along with other 11 journalists of the private press, has been incarcerated incommunicado detention since September 2001. Dawit and Jim’ie Kimeil, former Arabic state-newspaper who has been abducted by the Eritrean state security in 2005, are honorary members of PEN Austria.

Convener of the conference and PEN Austria’s Writers-in-Prison Committee chair, Mr. Wolfgang Martin Roth opened the session by underlying the importance such gathering. Remarking Eritrea’s abysmal situations, Mr. Roth said, “Eritrea is human rights cemetery.”  He further added, “history will judge people who did not try,” to either improve or voice their stands on such critical times when they were capable of doing it.

Poet and journalist Yirgalem Fisseha Mebrahtu was the guest of honor and keynote speaker of the conference. Yirgalem, who has been detained in Eritrea’s military prison for six years, detailed the conditions of Eritrean prisons where many innocent citizens have been arbitrarily detained and live under most harsh conditions.

Following the keynote address, Björn Tunbäck, a Swedish journalist who has been speared-heading Dawit Isaak’s campaign shared the different initiatives/attempts for release of the journalist Dawit Isaak. Mr. Tunbäck underscored how EU has been failing to advocate for its citizen. Although the final decision rests on the Eritrean government, yet as Mr. Tunbäck noted that Sweden could have exerted more pressure than it currently does.

Thijs Berman, director of Netherlands Institute for Multiparty Democracy, gave a presentation on how his institute has been working in Ethiopia’s promising transition.

Participants then discussed and brainstormed on possible initiatives to raise awareness of the incarcerated/disappeared Eritreans and explore ways to publish books. It was PEN Austria in collaboration with PEN Swiss German Center that published Uncensored Voices: Essays and Poems and Art Works by exiled Eritreans (Löcker Verlag, 2018).

After the brainstorming session, participants headed to BUCH WIEN 19 (the Vienna Book Fair) to attend book presentation of Dawit Isaak’s new German translation. The session was moderated by the convener of the conference and translator of the book into German (from English) Wolfgang Martin Roth. He was joined by Björn Tunbäck; Yirgalem Fisseha Mebrathu; Betlhem D. Isaak (Dawit Isaak’s daughter), and Abraham T. Zere (co-translator of the book from Tigrinya into English).

After dinner Yirgalem Fisseha recited some poems from her debut poetry collection book–ኣለኹ (“Aleku”)–that has been released in October. Six of the poems she had recited were translated into English by Ghirmai Negash and Tedros Abraham. While Sudanese poet Ishraga Mustafa translated one poem from English into Arabic. The poetry reading event was accompanied by a drummer from Senegal.